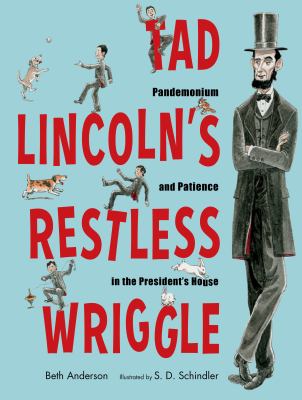 Pandemonium and Patience in the President's House

Anderson, Beth/ Schindler, S. D. (ILT)
Format: Book
Tad Lincoln's restless wriggle just wouldn't quit, much to the delight of his father President Abraham Lincoln -- but not so much to anybody else! This picture book is based on the famous first son who, despite a disability and other challenges, had compassion, intelligence, and wisdom beyond his years.

Tad Lincoln's boundless energy annoyed almost everyone but his father, President Abraham Lincoln. But Tad put that energy to good use during the tough times of the Civil War. Abraham Lincoln guided Tad's wriggle on visits to hospitals, to the telegraph office, and to army camps. Tad greeted visitors, raised money for bandages, and kept his father company late into the night. This special and patient bond between father and son was plain to see, and before long, Tad had wriggled his way into the hearts of others as well. Beth Anderson and S.D. Schindler follow Tad's antics during the Civil War to uncover the generous heart and joyful spirit that powered Tad's restless wriggle.
ISBN: 1635923158