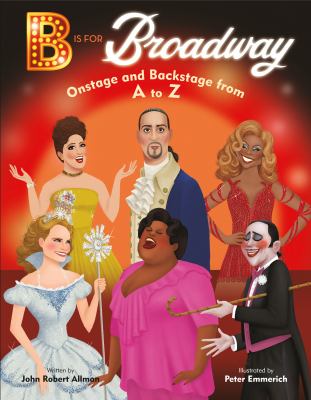 Onstage and Backstage from a to Z

Allman, John Robert/ Emmerich, Peter (ILT)
Format: Book
Description: 48 p. ;
"A must-have for all Broadway lovers-- B Is for Broadway --a book I am actually in!!! I am buying a dozen." --ROSIE O'DONNELL, Isabelle Stevenson Award recipient, three-time Tony Awards host, and Emmy Award winner

New from the creators of A Is for Audra: Broadway's Leading Ladies from A to Z !

From AUDITIONS to ZIEGFELD, grab a ticket to this smash-hit, rhythmic alphabet book featuring your favorite performers, creators, songs, and shows from the Broadway stage!

Step into the spotlight and celebrate a cavalcade of Broadway legends! Start with "A" for "audition" with the iconic line-up from A Chorus Line , then peek behind "B" to see the "backstage" buzz, and dance along with "C" for "choreographers".

Children and grown-ups alike can spot beloved stars and creators from today and yesterday, such as Lin-Manuel Miranda, Patti LuPone, Michael Bennett, Jennifer Holliday, Ethel Merman, and Billy Porter. Readers will also see famous New York theaters, beloved shows such as Hamilton and Hairspray , and the crew, stylists, and technicians who are vital to each performance. It's a celebration of the American stage that no fan is going to want to miss.

A portion of the proceeds from the sale of this book is donated to The Actors Fund.

B Is for Broadway is a hit with the stage's greatest stars!

" B Is for Broadway celebrates the entire Broadway community--backstage, onstage, everyone! who works in our performing arts and entertainment community. I'm honored to be a part of that beautiful community, and this lovely book." -- BEBE NEUWIRTH , Tony and Emmy Award-winning dancer, singer, actress ( Sweet Charity, Chicago, Cheers ), and Vice Chair of The Actors Fund

"The illustrations--gorgeous. The rhymes--delicious. This book--a must-have! B is for Broadway and buy-it-now!" -- KRISTIN CHENOWETH , Tony Award-winning actress ( You're a Good Man, Charlie Brown )

"What a dynamite willkommen to the world of Broadway!" -- JOEL GREY , Tony Award and Oscar-winning actor ( Cabaret )

" B Is for Broadway is a gorgeous children's book that will introduce a young person to all the magic of theater!" -- ALI STROKER , Tony Award-winning actress ( Oklahoma! )
ISBN: 0593305639