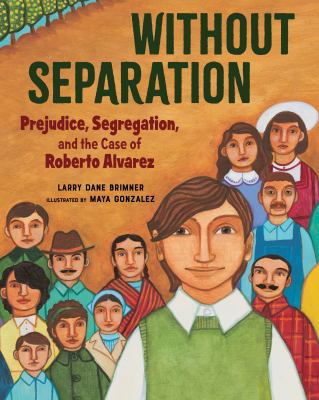 Prejudice, Segregation, and the Case of Roberto Alvarez

Brimner, Larry Dane/ Gonzalez, Maya (ILT)
Format: Book
Description: 40 p. ;
This important yet little-known civil rights story focuses on Roberto Alvarez, a student whose 1931 court battle against racism and school segregation in Lemon Grove, California, is considered the first time an immigrant community used the courts to successfully fight injustice. A must-read for young activists, or for anyone interested in standing up for what's right.

Roberto Alvarez's world changed the day he could no longer attend Lemon Grove Grammar School in the small, rural community where he lived near San Diego, California. He and the other Mexican American students were told they had to go to a new, separate school--one where they would not hold back the other students. But Roberto and the other students and their families believed the new school's real purpose was to segregate, to separate. They didn't think that was right, or just, or legal.

Based on true events, this picture book by Sibert award-winning author Larry Dane Brimner and Pura Belpré honor award-winning illustrator Maya Gonzalez follows Roberto and the other immigrant families on their journey.
ISBN: 1684371953