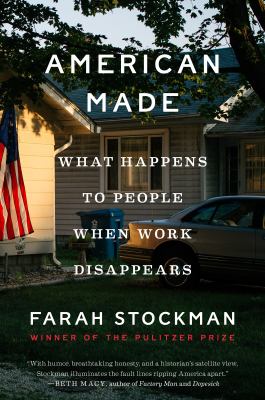 What Happens to People when Work Disappears

Stockman, Farah, author.
Format: Book
Edition: First edition.
Description: viii, 418 pages : illustration ; 25 cm
"Shannon, Wally, and John built their lives around their place of work. Shannon, a white single mother, became the first woman to run the factory's dangerous furnaces at the Rexnord manufacturing plant in Indianapolis and was proud of producing one of the world's top brands of steel bearings. Wally, a black man known for his initiative and kindness, was promoted to become chairman of efficiency, one of the most coveted posts on the factory floor, and dreamed of starting his own barbecue business one day. John, a white machine operator, came from a multigenerational union family and clashed with a work environment that was increasingly hostile to organized labor. The Rexnord factory had served as one of the economic engines for the surrounding community. When the factory closed, hundreds of people lost their jobs. What had life been like for Shannon, Wally, and John, before the factory closed? And what became of them after the factory moved to Mexico and Texas? American Made is a story about people and a community struggling to reinvent itself. It is also a story about race, class, and American values, and how jobs serve as a bedrock of people's lives and drive powerful social justice movements. This revealing book is also about this political moment, when joblessness and uncertainty about the future of work have made themselves heard at a national level. Most of all it is a story about people: who we consider to be one of us, and how the dignity of work lies at the heart of who we are"-- Provided by publisher.
Subjects:
Plant shutdowns -- Indiana -- Indianapolis -- Case studies.
Working class -- Indiana -- Indianapolis -- Case studies.
Work -- Social aspects -- Indiana -- Indianapolis -- Case studies.
Unemployed -- Indiana -- Indianapolis -- Case studies.
Indianapolis (Ind.) -- Economic conditions -- 21st century.
Indianapolis (Ind.) -- Social conditions -- 21st century.

Hold
Book
5 of 6 available
Save to List
Includes bibliographical references (pages 367-402) and index.