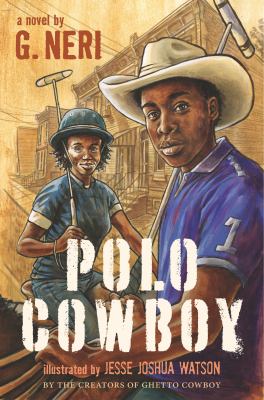 When Cole moves in with his dad, Harp, he thinks life will be sweet--just him and his horse, Boo, hanging out with Philadelphia's urban cowboys. But when Harp says he has to get a job, Cole winds up as a stable hand for the polo team at George Washington Military Academy, where the players are rich, white, and stuck-up--all except Ruthie, the team's first and only girl, who's determined to show the others she can beat them at their own game. As Cole and Ruthie become friends--and maybe more--he starts imagining his future, maybe even at the academy. But between long workdays, arrogant polo players, and a cousin trying to pull Cole into his dangerous business, that future seems remote. Will Cole find the courage to stand and be seen in a world determined to keep him out? With striking illustrations by Jesse Joshua Watson, celebrated author G. Neri's novel weaves themes of tenacity and community into a rousing sports story inspired by Philadelphia's real-life urban cowboys and polo players.
ISBN: 153620711X