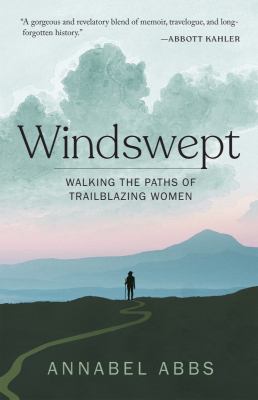 Walking the Paths of Trailblazing Women

Abbs, Annabel, 1964- author.
Format: Book
Edition: First US edition.
Description: xxv, 363 pages ; 23 cm
"Annabel Abbs's Windswept: Walking the Paths of Trailblazing Women is a beautifully written meditation and memoir that reflects on that most fundamental way of connecting with the outdoors: the simple act of walking. In absorbing and transporting prose, Abbs follows in the footsteps of groundbreaking women, including Georgia O'Keeffe in the empty plains of Texas and New Mexico, Nan Shepherd in the mountains of Scotland, Gwen John following the French River Garonne, Daphne du Maurier following the River Rhône, and Simone de Beauvoir--who walked as much as twenty-five miles a day in a skirt and espadrilles--in the mountains and forests of France. These trailblazing women were reclaiming what had historically been considered male domains. The stories of these incredible women and artists are laced together by the wilderness walking in Abbs's own life, beginning with her poet father who raised her in the Welsh countryside as an "experiment," according to the principles of Rousseau. Windswept is an inventiveretrospective and an arresting look forward to the way walking brings about a kind of clarity of thought not found in any other activity, and how it has allowed women throughout history to reimagine their lives and break free from convention. As Abbs traces the paths of these exceptional women, she realizes that she, too, is walking away from, and towards, a very different future. Windswept crosses continents and centuries in an arresting and stirring reflection on the power of walking in nature"-- Provided by publisher.
Subjects:
Walking -- Anecdotes.
Walking -- Psychological aspects.
Women hikers -- Biography.