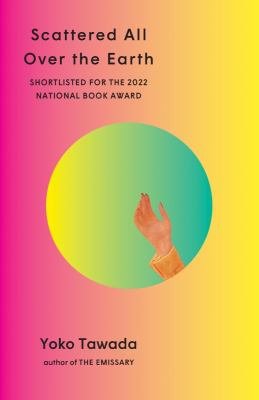 Tawada, Yōko, 1960- author.
Format: Book
Edition: First edition.
Description: 219 pages ; 21 cm.
"Welcome to the not-too-distant future: Japan, having vanished from the face of the earth, is now remembered as "the land of sushi." Hiruko, its former citizen and a climate refugee herself, has a job teaching immigrant children in Denmark with her invented language Panska (Pan-Scandinavian): "homemade language. no country to stay in. three countries I experienced. insufficient space in brain. so made new language. homemade language." As she searches for anyone who can still speak her mother tongue, Hiruko soon makes new friends. Her troupe travels to France, encountering an umami cooking competition; a dead whale; an ultra-nationalist named Breivik; unrequited love; Kakuzo robots; red herrings; uranium; an Andalusian matador. Episodic and mesmerizing scenes flash vividly along, and soon they're all next off to Stockholm. With its intrepid band of companions, Scattered All Over the Earth (the first novel of a trilogy) may bring to mind Alice's Adventures in Wonderland or a surreal Wind in the Willows, but really is just another sui generis Yoko Tawada masterwork"-- Provided by publisher.
Series: New Directions paperbook ; 1523.
Other Authors:
Mitsutani, Margaret, translator.
Subjects:
Refugees -- Fiction.
Language and languages -- Fiction.
Climatic changes -- Fiction.