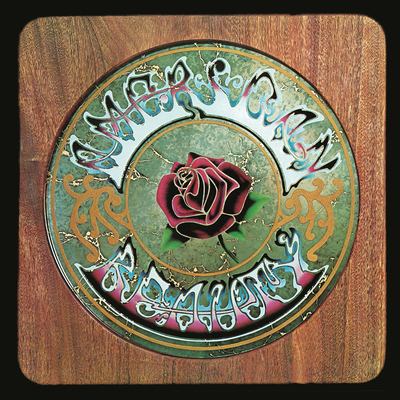 Grateful Dead (Musical group), performer, composer.
Format: Vinyl
Description: 1 audio disc : 33 1/3 rpm, stereo ; 12 in.
With 1970's Workingman's Dead, the Grateful Dead went through an overnight metamorphosis, turning abruptly from tripped-out free-form rock toward sublime acoustic folk and Americana. Taking notes on vocal harmonies from friends Crosby, Stills, Nash & Young, the Dead used the softer statements of their fourth studio album as a subtle but moving reflection on the turmoil, heaviness, and hope America's youth was facing as the idealistic '60s ended. American Beauty was recorded just a few months after its predecessor, both expanding and improving on the bluegrass, folk, and psychedelic country explorations of Workingman's Dead with some of the band's most brilliant compositions. The songs here have a noticeably more relaxed and joyous feel. Having dived headfirst into this new sound with the previous album, the bandmembers found the summit of their collaborative powers here, with lyricist Robert Hunter penning some of his most poetic work, Jerry Garcia focusing more on gliding pedal steel than his regular electric lead guitar work, and standout lead vocal performances coming from Bob Weir (on the anthem to hippie love "Sugar Magnolia"), Ron "Pigpen" McKernan (on the husky blues of "Operator"), and Phil Lesh (on the near-perfect opening tune, "Box of Rain"). This album also marked the beginning of what would become a long musical friendship between Garcia and Dave Grisman, whose mandolin playing adds depth and flavor to tracks like the outlaw country-folk of "Friend of the Devil" and the gorgeously devotional "Ripple." American Beauty eventually spawned the band's highest charting single -- "Truckin'," the greasy blues-rock tribute to nomadic counterculture -- but it also contained some of their most spiritual and open-hearted sentiments ever, their newfound love of intricate vocal arrangements finding pristine expression on the lamenting "Brokedown Palace" and the heavenly nostalgia and gratitude of "Attics of My Life." While the Dead eventually amassed a following so devoted that following the band from city to city became the center of many people’s lives, the majority of the band's magic came in the boundless heights it reached in its live sets but rarely managed to capture in the studio setting. American Beauty is a categorical exception to this, offering a look at the Dead transcending even their own exploratory heights and making some of their most powerful music by examining their most gentle and restrained impulses. It’s easily the masterwork of their studio output, and a strong contender for the best music the band ever made, even including the countless hours of live shows captured on tape in the decades that followed. ~ Fred Thomas
Contents: Box of rain (5:16) -- Friend of the devil (3:20) -- Sugar magnolia (3:15) -- Operator (2:21) -- Candyman (6:12) -- Ripple (4:10) -- Brokedown palace (4:10) -- Till the morning comes (3:13) -- Attics of my life (5:09) -- Truckin' (5:09).
Subjects:
Rock music.