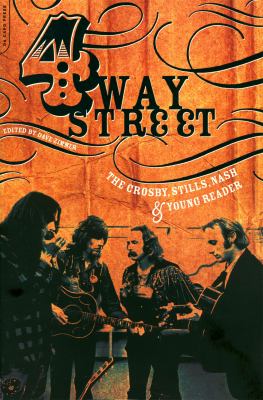 Format: Book
Edition: First Da Capo Press edition.
Description: xiii, 382 pages : illustrations ; 23 cm
Crosby, Stills, Nash & Young have been hailed as "The American Beatles" and "Folk-Rock's Mount Rushmore." They launched a trail-blazing acoustic-electric sound in 1969 and have been captivating listeners with their music ever since. Coming together as refugees from three seminal '60s bands-the Byrds, Buffalo Springfield and the Hollies-the combined talents of David Crosby, Stephen Stills, Graham Nash and Neil Young have influenced several generations of musicians while proving to have enduring appeal to fans of all ages. As rock and roll's first "supergroup," CSNY generated an enormous amount of media scrutiny-from their galvanizing appearance at Woodstock to multi-platinum, chart-topping albums such as Deja Vu, from David Crosby's miraculous recovery from life-threatening addictions to the band's resurgence for enormously successful concert tours. Now, noted CSNY historian Dave Zimmer distills the best of the journalism on these four remarkable artists, ranging from group portraits to individual profiles to in-depth interviews to incisive commentary by such writers as Cameron Crowe, Ben Fong-Torres and David Crosby himself. 4 Way Street: The Crosby, Stills, Nash & Young Reader is an open window into one of the most popular groups of all time, offering a fascinating look at their highly charged musical relationships and how they have changed over the decades, along the way revealing a colorful chronicle of the music of an era that continues to echo into the new millennium.
Other Authors:
Zimmer, Dave.
Subjects:
Crosby, Stills, Nash & Young.
Rock musicians -- United States -- Biography.