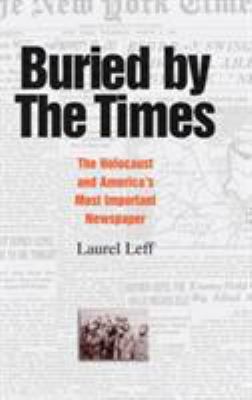 The Holocaust and America's Most Important Newspaper

Leff, Laurel, 1957-
Format: Book
Description: xii, 426 pages : illustrations, maps ; 24 cm
An in-depth look at how The New York Times failed in its coverage of the fate of European Jews from 1939-45. It examines how the decisions that were made at The Times ultimately resulted in the minimizing and misunderstanding of modern history's worst genocide. Laurel Leff, a veteran journalist and professor of journalism, recounts how personal relationships at the newspaper, the assimilationist tendencies of The Times' Jewish owner, and the ethos of mid-century America, all led The Times to consistently downplay news of the Holocaust. It recalls how news of Hitler's 'final solution' was hidden from readers and - because of the newspaper's influence on other media - from America at large. Buried by The Times is required reading for anyone interested in America's response to the Holocaust and for anyone curious about how journalists determine what is newsworthy.
Contents: "Last voice from the abyss" -- I: 1933-1941 -- "Not a Jewish problem": the publisher's perspective on the Nazis' rise and the refugee crisis -- :This here is Germany": reporting from the Berlin bureau -- "Worthy of France": the vichy government's anti-semitic laws and concentration camps -- "A new life in Nazi-built ghettos": German domination of Poland, Rumania, and the Baltic states -- II: 1942-1945 -- "To awaken the conscience of Christendom": pressure to publicize the first news of the extermination campaign -- "Amidst the advertisements on page 19": placement decisions and the role of the news editors -- "All Jews are not brothers": the publisher's fight with Zionists -- "The Semitic question should be avoided": German atrocities and U.S. government propaganda -- "Final phase of supreme tragedy has begun": The war refugee board and the destruction of Hungary's Jews -- "Political prisoners, slave laborers, and civilians of many nationalities": the liberation of the concentration camps -- "Lessons from the Hitler tragedy": the publisher and the aftermath of war -- "The horrible story was not told".
Subjects:
New York Times Company.
Holocaust, Jewish (1939-1945) -- Press coverage -- United States.
World War, 1939-1945 -- Press coverage -- United States.
Journalism -- Social aspects -- United States.

Hold
Book
1 of 1 available
Save to List
Includes bibliographical references (pages 377-416) and index.