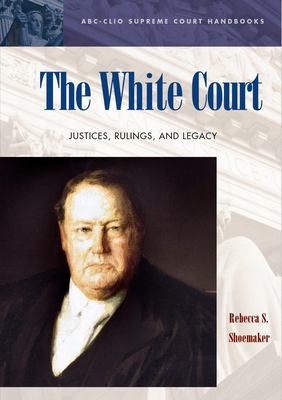 An in-depth examination of the U.S. Supreme Court under the 11-year reign of Chief Justice Edward Douglass White.

The White Court: Justices, Rulings, and Legacy examines the workings and legacies of the Supreme Court during the tenure of Chief Justice Edward Douglass White. Through detailed discussions of landmark cases, this reference work explores the role the Court played in steering the country through an era of economic growth, racial discrimination, and international warfare.

The White Court reveals how the Court established its greatest legacy, the "rule of reason," in antitrust cases against the American Tobacco Company and Standard Oil, and how it resolved controversies concerning the expansion of executive power during wartime. Individual profiles of the 13 White Court justices describe their rise to prominence and controversies surrounding their nominations, their work on the Court, judicial philosophies, important decisions, and overall impact.