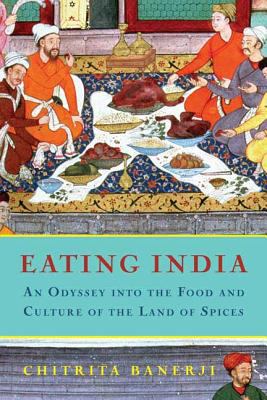 Though it's primarily Punjabi food that's become known as Indian food in the United States, India is as much an immigrant nation as America, and it has the vast range of cuisines to prove it. In Eating India , award-winning food writer and Bengali food expert Chitrita Banerji takes readers on a marvelous odyssey through a national cuisine formed by generations of arrivals, assimilations, and conquests. With each wave of newcomers-ancient Aryan tribes, Persians, Middle Eastern Jews, Mongols, Arabs, Europeans-have come new innovations in cooking, and new ways to apply India's rich native spices, poppy seeds, saffron, and mustard to the vegetables, milks, grains, legumes, and fishes that are staples of the Indian kitchen. In this book, Calcutta native and longtime U.S. resident Banerji describes, in lush and mouthwatering prose, her travels through a land blessed with marvelous culinary variety and particularity.

"Skillfully moving backward and forward in time, Banerji, a culinary historian based in the U.S. whose previous books have explored the cookery of her native Bengal (Life and Food in Bengal), regards India with the intimacy of a native, the curiosity of an outsider and the broad vantage of an expatriate. In the course of her culinary tours across the subcontinent, she poses compelling questions about the nature of authenticity in a time of great flux, the mutability of tradition and the place of food in secular life and religious culture. For answers, she looks not only to the past but to the present as it unfolds in roadside shacks, sweet shops or a temple canteen, describing how outside influences such as colonialism and immigration have shaped India's regional cuisines. Early in this engaging work, Banerji recounts how whenever she invites Americans to her home for an elaborate meal, rather than sampling each dish in sequence-the better to appreciate its subtle flavors-her guests heap together meat, rice and