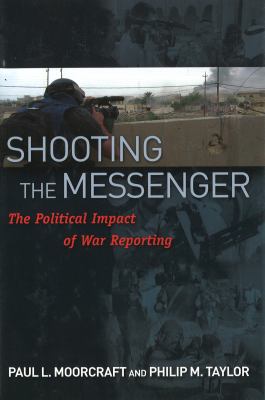 The Political Impact of War Reporting

Moorcraft, Paul L.
Format: Book
Edition: First edition.
Description: xv, 318 pages ; 24 cm
As the literature on military-media relations grows, it is informed by antagonism either from journalists who report on wars or from ex-soldiers in their memoirs. Academics who attempt more judicious accounts rarely have any professional military or media experience. A working knowledge of the operational constraints of both professions underscores Shooting the Messenger . A veteran war correspondent and think tank director, Paul L. Moorcraft has served in the British Ministry of Defence, while historian-by-training Philip M. Taylor is a professor of international communications who has lectured widely to the U.S. military and at NATO institutions. Some of the topics they examine in this wide-ranging history of military-media relations are: - the interface between soldiers and civilian reporters covering conflicts - the sometimes grey area between reporters' right or need to know and the operational security constraints imposed by the military - the military's manipulation of journalists who accept it as a trade-off for safer battlefield access - the resultant gap between images of war and their reality - the evolving nature of media technology and the difficulties--and opportunities--this poses to the military - journalistic performance in reporting conflict as an observer or a participant Moorcraft and Taylor provide a bridge over which each side can pass and a path to mutual understanding.
Other Authors:
Taylor, Philip M.
Contents: The origins of war reporting -- The world wars -- The Cold War (of words) -- African "sideshows"? -- Europe's intra-state conflicts -- The Middle East and Afghanistan -- The long war -- The mechanics of reporting war and peace -- No more heroes?
Subjects:
War -- Press coverage -- History.
Press and politics -- History.

Hold
Book
1 of 1 available
Save to List
Includes bibliographical references (pages 293-301) and index.