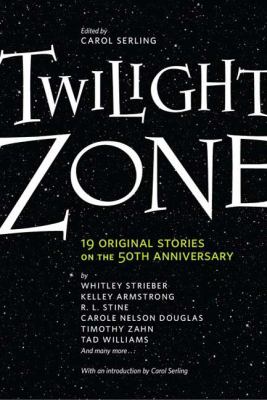 19 Original Stories on the 50th Anniversary

When it first aired in 1959, The Twilight Zone was nothing less than groundbreaking television. Freed from much of the censors' strict oversight because of the show's classification as "science fiction," the 156 filmed episodes explored powerful and moving human themes--love, hate, pride, jealousy, terror--in their own unique style.The show has since inspired two revivals, as well as fiction, comic books, and magazines, and even a pinball game and theme park rides. Just as important, it sparked the imaginations of countless writers, filmmakers, and fans around the world, and is considered a seminal show for broadening the horizons of television.

This anthology will be an all-new collection of stories written in the vein of the original television show. Edited and featured and introduction by Carol Serling, the anthology will include brand new stories by science fiction and fantasy luminaries such as Whitley Strieber, Loren D. Estleman, Joe Lansdale, R. L. Stein, Timothy Zahn, and Peter S. Beagle, as well as writers from the original series, Earl Hammer and Harlan Ellison®, all in honor of Rod's incredible vision.

Hold
Book
1 of 1 available
Save to List
"A Tom Doherty Associates book."