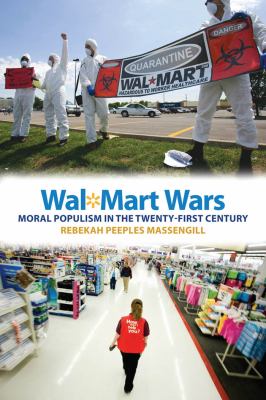 Moral Populism in the Twenty-first Century

Wal-Mart is America's largest retailer. The national chain of stores is a powerful stand-in of both the promise and perils of free market capitalism. Yet it is also often the target of public outcry for its labor practices, to say nothing of class-action lawsuits, and a central symbol in America's increasingly polarized political discourse over consumption, capitalism and government regulations. In many ways the battle over Wal-Mart is the battle between "Main Street" and "Wall Street" as the fate of workers under globalization and the ability of the private market to effectively distribute precious goods like health care take center stage.

In Wal-Mart Wars, Rebekah Massengill shows that the economic debates are not about dollars and cents, but instead represent a conflict over the deployment of deeper symbolic ideas about freedom, community, family, and citizenship. Wal-Mart Wars argues that the family is not just a culture wars issue to be debated with regard to same-sex marriage or the limits of abortion rights; rather, the family is also an idea that shapes the ways in which both conservative and progressive activists talk about economic issues, and in the process, construct different moral frameworks for evaluating capitalism and its most troubling inequalities. With particular attention to political activism and the role of big business to the overall economy, Massengill shows that the fight over the practices of this multi-billion dollar corporation can provide us with important insight into the dreams and realities of American capitalism.