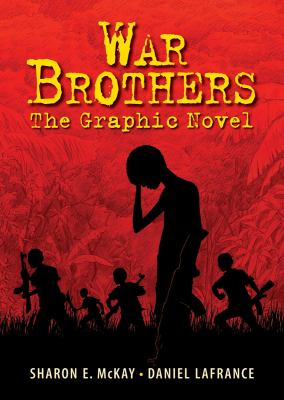 The unforgettable novel about one child soldier's struggle with friendship, courage, and resilience.

Jacob is a 14-year-old Ugandan who is sent away to a boys' school. Once there, he assures his friend Tony that they need not be afraid--they will be safe. But not long after, in the shadow of the night, the boys are abducted. Marched into the jungle, they are brought to an encampment of the feared rebel soldiers. Told that they must kill or be killed, the boys are thrust into a terrifying struggle to endure and survive.

In time, the boys escape. Hunted by the rebels, stalked by a lion, and even pursued by river crocs, they miraculously succeed in reaching safety; however, it is no longer enough. Jacob's adventures force him to confront evil, victimization, and the dark side of human nature, but also teach him about loyalty, friendship, and the true meaning of family.

Daniel Lafrance's striking artwork and the poignant, powerful text capture the very essence of life as a child soldier. Readers will never forget the experiences of this young boy struggling to survive, unsure who to trust, afraid of succumbing to madness, and above all, desperate to get to freedom. In the end, Jacob engineers a daring escape.

This graphic novel is based on the acclaimed novel of the same title, winner of a 2009 Arthur Ellis award. The author spent time in Uganda and based this story on real-life accounts of the horrors inflicted on child soldiers and their victims. This is a story of unthinkable violence, but also one of hope, courage, friendship, and family.