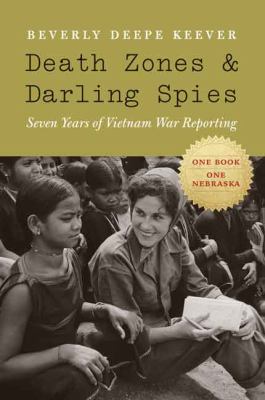 Chosen for 2015 One Book One Nebraska

In 1961, equipped with a master's degree from famed Columbia Journalism School and letters of introduction to Associated Press bureau chiefs in Asia, twenty-six-year-old Beverly Deepe set off on a trip around the world. Allotting just two weeks to South Vietnam, she was still there seven years later, having then earned the distinction of being the longest-serving American correspondent covering the Vietnam War and garnering a Pulitzer Prize nomination.

In Death Zones and Darling Spies , Beverly Deepe Keever describes what it was like for a farm girl from Nebraska to find herself halfway around the world, trying to make sense of one of the nation's bloodiest and bitterest wars. She arrived in Saigon as Vietnam's war entered a new phase and American helicopter units and provincial advisers were unpacking. She tells of traveling from her Saigon apartment to jungles where Wild West-styled forts first dotted Vietnam's borders and where, seven years later, they fell like dominoes from communist-led attacks. In 1965 she braved elephant grass with American combat units armed with unparalleled technology to observe their valor--and their inability to distinguish friendly farmers from hide-and-seek guerrillas.

Keever's trove of tissue-thin memos to editors, along with published and unpublished dispatches for New York and London media, provide the reader with you-are-there descriptions of Buddhist demonstrations and turning-point coups as well as phony ones. Two Vietnamese interpreters, self-described as "darling spies," helped her decode Vietnam's shadow world and subterranean war. These memoirs, at once personal and panoramic, chronicle the horrors of war and a rise and decline of American power and prestige.

Hold
Book
0 of 1 available
Save to List
Includes bibliographical references (pages 289-323) and index.