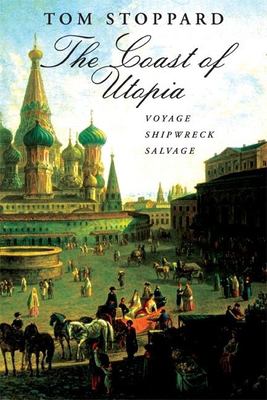 Stoppard, Tom.
Format: Book
Edition: Revised edition.
Description: xv, 347 pages ; 21 cm
Tom Stoppard's magnificent trilogy, The Coast of Utopia , was the most keenly awaited and successful drama of 2007. Now "Stoppard's crowning achievement" (David Cote, Time Out New York ) has been collected in one volume, with an introduction by the author, and includes the definitive text used during Lincoln Center's recent celebrated run. The Coast of Utopia comprises three sequential plays that chronicle the story of a group of friends who come of age under the Tsarist autocracy of Nicholas I, and for whom the term "intelligentsia" was coined. Among them are the anarchist Michael Bakunin, who was to challenge Marx for the soul of the masses; Ivan Turgenev, author of some of the most enduring works in Russian literature; the brilliant, erratic young critic Vissarion Belinsky; and Alexander Herzen, a nobleman's son and the first self-proclaimed socialist in Russia, who becomes the main focus of this drama of politics, love, loss, and betrayal. In The Coast of Utopia , Stoppard presents an inspired examination of the struggle between romantic anarchy, utopian idealism, and practical reformation in what The New York Times calls "brilliant, sprawling . . . a rich pageant."
Contents: Voyage -- Shipwreck -- Salvage.
Subjects:
Herzen, Aleksandr, 1812-1870 -- Drama.
Bakunin, Mikhail Aleksandrovich, 1814-1876 -- Drama.
Belinsky, Vissarion Grigoryevich, 1811-1848 -- Drama.
Ogarev, N. P. (Nikolaĭ Platonovich), 1813-1877 -- Drama.
Revolutionaries -- Drama.
Radicalism -- Russia -- History -- 19th century -- Drama.
Russia -- History -- Nicholas I, 1825-1855 -- Drama.
Russia -- History -- Alexander II, 1855-1881 -- Drama.

Hold
Book
1 of 1 available
Save to List
Introduction by the author.
"This edition of The coast of Utopia, ... closely follows the New York [production] text."--Introduction.
"Comprises three sequential plays that chronicle a group of friends who come of age under the Tsarist autocracy of Nicholas I, and for whom the term 'intelligentsia' was coined"--P. [4] of cover.