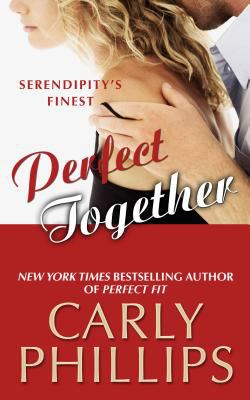 Phillips, Carly.
Format: Large Print
Edition: Large Print edition.
Description: 429 pages (large print) ; 23 cm.
In the picturesque town of Serendipity, New York, three siblings have grown up in the shadow of their proud and respected police chief father. But what do love, fate, and fortune have in store for the next generation of Serendipity's finest?
Tired of being the easygoing daughter, always ignored in favor of her high-maintenance sister, and no longer interested in being her fiance's trophy wife, Nicole Farnsworth calls off her wedding. All she wants is to be herself. And where better to find her destiny than Serendipity? The place where she met the one man who made her heart beat faster, and gave her the courage to reinvent her life--even if he doesn't know it.
Officer Sam Marsden calls Serendipity home and he loves it there--even though his childhood sweetheart was stolen by his best friend. After such heartbreak, Sam fears he can't trust his instincts when it comes to love. Yet he's so tempted by Nicole, a woman he met only briefly but who has starred in his dreams ever since. For Nicole and Sam, opening their hearts one more time could change their lives forever. But who'll be the first to take that chance?
Series: Phillips, Carly. Serendipity novel.
Subjects:
Large type books.
New York -- Fiction.