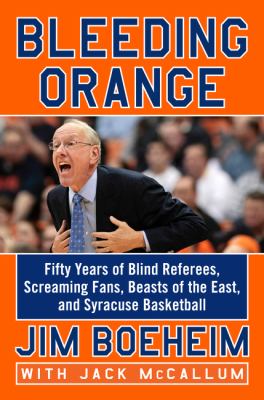 In this candid autobiography, Syracuse head coach and long time college basketball fixture Jim Boeheim reflects on his life, his teachers, and the game he loves.

Jim Boeheim walked onto the Syracuse campus as a freshman in 1963 . . . and never walked off. A man who has been written off at various stages of his career and criticized for being disagreeable, Boeheim has experienced it all--triumph, despair, redemption; controversy, heartbreak, and scandal; championships, epic disappointments, colorful personalities, NCAA investigations.

His combative personality helped ignite what was arguably the most competitive college basketball conference ever: the Big East of the 1980s, when he and Syracuse battled with Big John Thompson of Georgetown, roly-poly Rollie Massimino of Villanova, feisty Jim Calhoun of Connecticut, and beloved Looie Carnesecca of St. John's, turning the Big East into a Coaches Conference and the Best Show in College Basketball. Boeheim talks about those days and the coming battles with powerhouses North Carolina and Duke, now that Syracuse has joined the Atlantic Coast Conference.

From his association with Syracuse greats Dave Bing (a college teammate), Pearl Washington, and Derrick Coleman, to the Olympics--where he coached players such as LeBron James, Kobe Bryant, and Kevin Durant--Boeheim has learned many lessons that have helped his team and continue to encourage him now as he nears seventy.

His unprecedented fifty-year career as a player, assistant, head coach and icon has given him unique insight into coaching and the college game, knowledge he now shares.