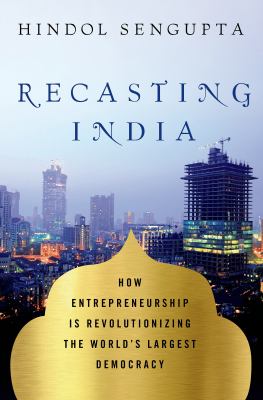 How Entrepreneurship is Revolutionizing the World's Largest Democracy

Sengupta, Hindol.
Format: Book
Description: 249 pages ; 24 cm
"Twenty years after India opened its economy, it faces severe economic problems, including staggering income inequality. A third of its citizens still lack adequate food, education, and basic medical services, while Mumbai businessman Mukesh Ambani lives in the most expensive home in the world, which cost over a billion dollars to build. Despite the fact that India now has a Mars mission, there are still more mobile phones than toilets in the country. In most places, such a disparity would have the locals pounding at the gates. So why no Arab Spring for India? Hindol Sengupta, senior editor of Fortune India, argues that the only thing holding it back is the explosion of local entrepreneurship across the country. While these operations are a far cry from the giant companies owned by India's ruling billionaires, they are drastically changing its politics, upending the old caste system, and creating a "middle India" full of unprecedented opportunity. Like Gazalla Amin whose flourishing horticulture business in the heart of Kashmir has given her the title 'lavender queen.' Or Sunil Zode, who stole the first shoes he ever wore and now drives a Mercedes, thanks to his thriving pesticide business. Sengupta shows that the true potential of India is even larger than the world perceives, since the economic miracle unfolding in its small towns and villages is not reflected in its stock markets. He reveals an India rarely seen by the larger world--the millions of ordinary, enterprising people who are redefining the world's largest democracy"-- Provided by publisher.
Contents: The business man called Tagore -- Business models in the world's most dangerous place -- The socialist moneylender -- Gujarat, riots and economics -- In the company of maids -- Models in villages -- The not untouchables -- The "pervert" pad maker -- Facebook for the poor and the village call center -- From dung to detergent -- Conclusion : was the Mahatma a socialist?
Subjects:
2000 - 2099
Entrepreneurship -- India.
Small business -- India.
Industries -- Social aspects -- India.
Economic history.
Entrepreneurship.
Industries -- Social aspects.
Small business.
Social history.
India -- Economic conditions -- 21st century.
India -- Social conditions -- 21st century.
India.