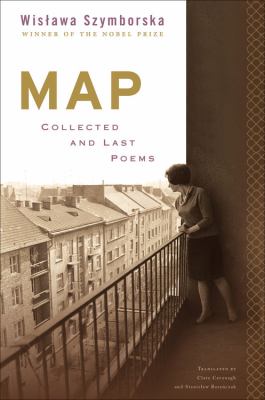 Szymborska, Wisława, author.
Format: Book
Description: xiv, 447 pages ; 24 cm
A new collected volume from the Nobel Prize-winning poet that includes, for the first time in English, all of the poems from her last Polish collection One of Europe's greatest recent poets is also its wisest, wittiest, and most accessible. Nobel Prize-winner Wislawa Szymborska draws us in with her unexpected, unassuming humour. Her elegant, precise poems pose questions we never thought to ask. "If you want the world in a nutshell," a Polish critic remarks, "try Szymborska." But the world held in these lapidary poems is larger than the one we thought we knew. Carefully edited by her longtime, award-winning translator, Clare Cavanagh, the poems in 'Map' trace Szymborska's work until her death in 2012. Of the approximately two hundred and fifty poems included here, nearly forty are newly translated; thirteen represent the entirety of the poet's last Polish collection, 'Enough', never before published in English. AUTHOR: Wislawa Szymborska (1923 - 2012) was born in Poland and worked as a poetry editor, translator and columnist. She was awarded the Nobel Prize in Literature in 1996. Clare Cavanagh, professor of Slavic and Comparative Literature at Northwestern, has received a PEN Translation Award for her work, with Stanislaw Baranczak , on Szymborska's poetry.
Other Authors:
Cavanagh, Clare, translator, editor.
Barańczak, Stanisław, 1946-2014, translator.