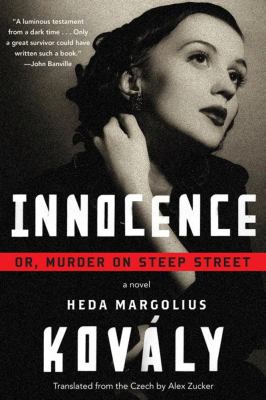 Kovály, Heda, 1919-2010.
Format: Book
Description: xvii, 234 pages ; 22 cm
"This rediscovered gem of Czech literature, a crime novel by renowned Holocaust memoirist Heda Margolius Kovaly, depicts a chilling moment in history, redolent with the stifling atmosphere of political and personal oppression of the early days of Socialist Czechoslovakia. In 1985, Czech Holocaust memoirist, literary translator, and political exile Heda Margolius Kovaly turned her pen to fiction. Inspired by the stories of Raymond Chandler, Kovaly knit her own terrifying experiences in early 1950s Socialist Prague -- her husband's imprisonment and wrongful execution, her own persecution at his disgrace -- into a gorgeous psychological thriller-cum-detective novel. Set in and around a cinema where a murder was recently committed, Innocence follows the unfolding of the investigation while telling the stories of the women who work there as ushers, each of whom is forced to support herself in difficult circumstances. As the novel brings this group alive, it tells their various life stories that have brought them to this job, the secrets they share with one another, and the secrets they keep. When the detective trying to solve the first murder is found slain by the cinema, all of their secrets come into the light. A smart, evocative, and deeply stirring literary crime novel with international appeal"-- Provided by publisher.
Other Authors:
Zucker, Alex, translator.
Subjects:
Motion picture theaters -- Fiction.
Murder -- Investigation -- Fiction.
Mystery fiction.
FICTION / Crime.
FICTION / Mystery & Detective / Women Sleuths.
Czechoslovakia -- Fiction.