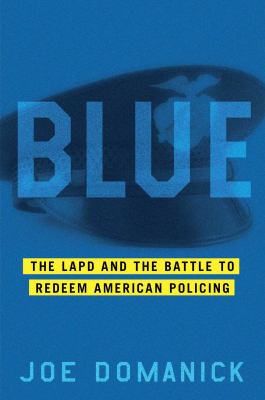 The LAPD and the Battle to Redeem American Policing

Domanick, Joe.
Format: Book
Edition: First Simon & Schuster hardcover edition.
Description: xix, 437 pages ; 24 cm
"An award-winning investigative reporter reveals the troubled history of the LAPD in a gripping story filled with hard-boiled, real-life characters that bring to life the ravages of the criminal justice system. Vividly drawn and character-driven, Blue is simultaneously a drama of cops, crime and politics, and a primer on American police policy and reform. Using the LAPD as the book's spine and through-line, Domanick illuminates urban policing at a crossroads during the tumultuous violence-plagued years of the early 1990s. Years when the beating of Rodney King and the LAPD's brutality sparked the 1992 Los Angeles Riots, and police departments were caught between an often brutal, corrupt and racist past, and the demands of a rapidly changing urban population and environment. From LA he then zooms to New York City, and details how the transformation of the NYPD that resulted in a dramatic decrease in crime--even while the LAPD remained in freefall for a decade more before it too begins its road to reformation. Blue ends in the summer of 2014 with crime at record lows, but events in LA, NYC and Ferguson, Mo., raising alarming warnings about aggressive racial profiling and the militarization of American policing. Filled with political intrigue and cultural and racial conflict, Domanick's fast-paced account distills this history through the vivid characters that shaped it, from America's premiere police reformer, William J. Bratton; to Daryl Francis Gates, Chief of the LAPD during fourteen of the most tumultuous years in LA's history; to Charlie Beck, a street-hardened LAPD cop who later becomes Bratton's prote;ge;; to Alfred Lomas and Andre Christian, former members of two of LA's most fearsome gangs, who represent the other side of the LAPD's war on crime"-- Provided by publisher.
Subjects:
Los Angeles (Calif.). Police Department.
Police -- California -- Los Angeles -- History.
Police misconduct -- California -- Los Angeles -- History.
Police administration -- California -- Los Angeles -- History.
Criminal justice, Administration of -- California -- Los Angeles -- History.

Hold
Book
1 of 1 available
Save to List
Includes bibliographical references (pages 425-428) and index.