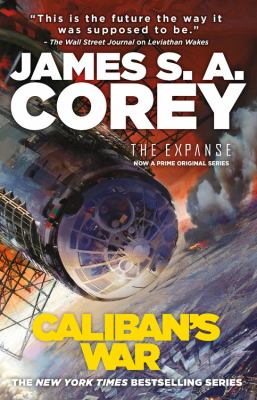 Corey, James S. A.
Format: Ebook
Related Information: http://api.overdrive.com/v1/collections/v1L1BRwAAAA2g/products/178fc32e-518f-4667-86e2-f6e9d90fbbee
Description: text file
The second novel in James S. A. Corey's SF New York Times bestselling Expanse series. Now a Syfy Orignal series, coming December 2015! We are not alone. On Ganymede, breadbasket of the outer planets, a Martian marine watches as her platoon is slaughtered by a monstrous supersoldier. On Earth, a high-level politician struggles to prevent interplanetary war from reigniting. And on Venus, an alien protomolecule has overrun the planet, wreaking massive, mysterious changes and threatening to spread out into the solar system. In the vast wilderness of space, James Holden and the crew of the Rocinante have been keeping the peace for the Outer Planets Alliance. When they agree to help a scientist search war-torn Ganymede for a missing child, the future of humanity rests on whether a single ship can prevent an alien invasion that may have already begun . . . Caliban's War is a breakneck science fiction adventure following the critically acclaimed Leviathan Wakes . The Expanse (soon to be a major Syfy Channel television series) Leviathan Wakes Caliban's War Abaddon's Gate Cibola Burn Nemesis Games The Expanse Short Fiction The Butcher of Anderson Station Gods of Risk The Churn
Other Authors:
OverDrive, Inc.
Subjects:
Fiction.
Science Fiction.