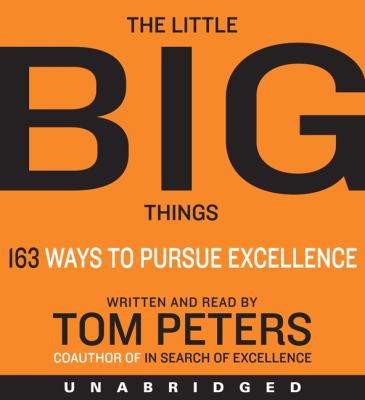 Peters, Thomas J.
Format: Eaudiobook
Edition: Unabridged.
Description: 1 online resource (1 audio file (11hr., 57 min.)) : digital.
#131 The Case of the Two-Cent Candy Years ago, I wrote about a retail store in the Palo Alto environs-a good one, which had a box of two-cent candies at the checkout. I subsequently remember that "little" parting gesture of the two-cent candy as a symbol of all that is Excellent at that store. Dozens of people who have attended seminars of mine-from retailers to bankers to plumbing-supply-house owners-have come up to remind me, sometimes 15 or 20 years later, of "the two-cent candy story," and to tell me how it had a sizable impact on how they did business, metaphorically and in fact. Well, the Two-Cent Candy Phenomenon has struck again-with oomph and in the most unlikely of places. For years Singapore's "brand" has more or less been Southeast Asia's "place that works." Its legendary operational efficiency in all it does has attracted businesses of all sorts to set up shop there. But as "the rest" in the geographic neighborhood closed the efficiency gap, and China continued to rise-race-soar, Singapore decided a couple of years ago to "rebrand" itself as not only a place that works but also as an exciting, "with it" city. (I was a participant in an early rebranding conference that also featured the likes of the late Anita Roddick, Deepak Chopra, and Infosys founder and superman N. R. Narayana Murthy.) Singapore's fabled operating efficiency starts, as indeed it should, at ports of entry-the airport being a prime example. From immigration to baggage claim to transportation downtown, the services are unmatched anywhere in the world for speed and efficiency. Saga . . . Immigration services in Thailand, three days before a trip to Singapore, were a pain. ("Memorable.") And entering Russia some months ago was hardly a walk in the park, either. To be sure, and especially after 9/11, entry to the United States has not been a process you'd mistake for arriving at Disneyland, nor marked by an attitude that shouted "Welcome, honored guest." Singapore immigration services, on the other hand: The entry form was a marvel of simplicity. The lines were short, very short, with more than adequate staffing. The process was simple and unobtrusive. And: The immigration officer could have easily gotten work at Starbucks; she was all smiles and courtesy. And: Yes! Yes! And . . . yes! There was a little candy jar at each Immigration portal! The "candy jar message" in a dozen ways: "Welcome to Singapore, Tom!! We are absolutely beside ourselves with delight that you have decided to come here!" Wow! Wow! Wow! Ask yourself . . . now: What is my (personal, department, project, restaurant, law firm) "Two-Cent Candy"? Does every part of the process of working with us/me include two-cent candies? Do we, as a group, "think two-cent candies"? Operationalizing: Make "two-centing it" part and parcel of "the way we do business around here." Don't go light on the so-called substance-but do remember that . . . perception is reality . . . and perception is shaped by two-cent candies as much as by that so-called hard substance. Start: Have your staff collect "two-cent candy stories" for the next two weeks in their routine "life" transactions. Share those stories. Translate into "our world." And implement. Repeat regularly. Forever. (Recession or no recession-you can afford two cents.) (In fact, it is a particularly Brilliant Idea for a recession-you doubtless don't maximize Two-Cent Opportunities. And what opportunities they are.)
Other Authors:
Peters, Thomas J.
hoopla digital. 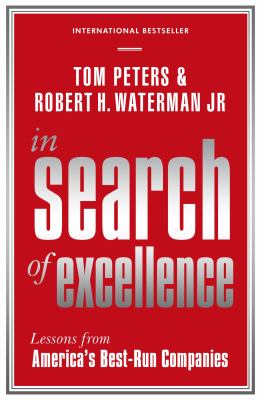