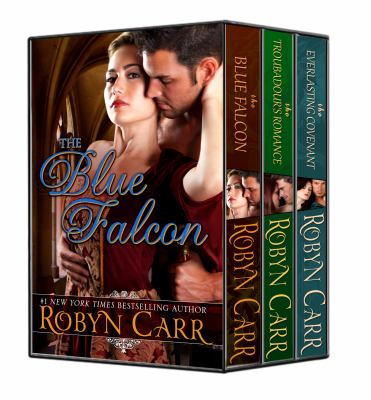 Carr, Robyn, author.
Format: Ebook
Description: 1 online resource
THE BLUE FALCON IN LOVE AND WAR, SOME OATHS ARE MEANT TO BE BROKEN... Riding into the arena under the furling blazon of the blue falcon, Sir Conan de Corbney accepts a token from the young beauty, Lady Chandra, sparking a romance foretold long ago. That is, unless Conan's mother can help it. Colluding with her son's rival, Sir Tedric, Lady Udele secretly arranges a more lucrative marriage for her son and weds him to Edwina--Chandra's older sister--while Sir Tedric claims the fiery Chandra for himself. Thus begins the star-crossed lovers' quest, amidst treachery and betrayal, for the path back to each other's arms. When a knight is pledged twice, once for loyalty and once for love, which oath will prove stronger? From private chambers to the distant bloodstained shores of the Crusades under King Richard's reign, THE BLUE FALCON is a timeless tale of adventure, treachery, and above all, an unforgettable love story. THE TROUBADOUR'S ROMANCE New to the Windsor court, beautiful and quick-witted Felise Scelfton instantly becomes the coveted object of desire. Spurred on by her flirtatious manner and rumors of her dowry, knights brandish their swords for her hand in marriage, but King Henry II has already decided her fate--His royal command gives her hand to Sir Royce Leighton, the scarred and brooding lord of Segeland, in order to seal a political alliance. Despite a tempestuous beginning, their arranged marriage gives way to desire, and Royce's bitter memories are soothed by his alluring young wife. However, the King isn't finished plotting, and old suitors seek revenge. Felise and Royce must weather enduring court scandals, but will their love be enough to survive the cruelest of betrayals? Set in 12th century England, THE TROUBADOUR'S ROMANCE is full of political intrigue, greed, and passion and is sure to dazzle Robyn's fans. AN EVERLASTING COVENANT Anne Gifford's dowry--or lack thereof--is of no concern to Sir Dylan DeFrayne. Wrapped in each other's arms, what more could they possibly need? Yet the young lovers' passion can never be sanctioned--the DeFraynes and Giffords have been sworn enemies for decades. Lest more blood be shed, the two must keep their affair a secret...and plot their elopement. Clad in threadbare hand-me-downs, Anne never expects the powerful and aged Brennan Forbes to remember her face, let alone propose marriage. Anne's parents hastily accept--the union aligns the Giffords with the Duke of York, while the DeFraynes pledge allegiance to the House of Lancaster, on the eve of the War of Roses. The arranged marriage looming ever closer, Dylan must brave the battlefield and bypass enemy lines to rescue his beloved. With a dynastic war and bitter rivalries standing in their way, Anne and Dylan must embark on a tortuous path that only the strongest of loves can endure. Set in 15th century England, THE EVERLASTING COVENANT is an irresistible mix of danger and passion, guaranteed to ensnare readers.
Other Authors:
Container of (work): Carr, Robyn. Blue falcon.
Container of (work): Carr, Robyn. Troubadour's romance.
Container of (work): Carr, Robyn. Everlasting covenant.
hoopla digital.