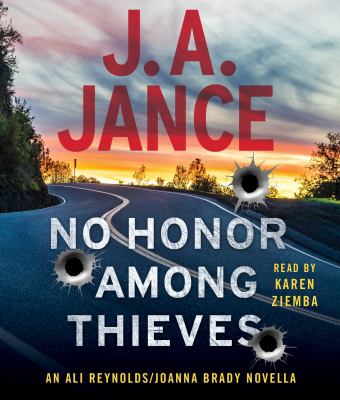 Jance, Judith A., author.
Format: Audiobook on CD
Edition: Unabridged.
Description: 2 audio discs (approximately 2 hours, 30 minutes) : digital, CD audio ; 4 3/4 in.
"For the first time ever, Ali Reynolds and Joanna Brady, New York Times bestselling author J.A. Jance's popular series sleuths, join forces to solve a terrifying crime in this exclusive novella that has everything you want in a thriller--page-turning action, breathtaking twists and turns, edge-of-your-seat suspense, and...Legos. "A semi's gone over the embankment." The call wakes Sheriff Joanna Brady in the middle of the night, but what brings her fully alert is the rest of the story. The driver didn't drift off to sleep and cross the center line--he was shot, multiple times, by someone with serious firepower. And when the truck crashed through the guardrail, its payload wound up scattered all over the road--boxes upon boxes of Legos. Legos that are being tracked by B. Simpson's security firm to reduce black market sales--and Ali Reynolds is just the woman to get to the bottom of the crime. She has the tech and the intel to follow the money (or, in this case, the Legos), which makes her a valuable asset to Joanna's team. Soon these two strong women realize that they're not just sharing a case, they're kindred spirits--which is paramount, because the killer they're up against is anything but child's play."-- Container.
Series: Jance, Judith A. Ali Reynolds novel. Spoken word.
Other Authors:
Ziémba, Karen, narrator.
Subjects:
Reynolds, Ali (Fictitious character) -- Fiction.
Brady, Joanna (Fictitious character) -- Fiction.
Murder -- Fiction.

More By Jance, Judith A., author.