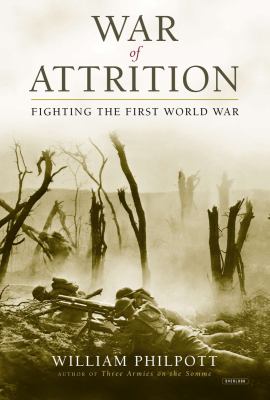 Philpott, William James.
Format: Book
Edition: First edition.
Description: xiv, 400 pages : illustrations ; 24 cm
The Great War of 1914-1918 was the first mass conflict to fully mobilize the resources of industrial powers against one another, resulting in a brutal, bloody, protracted war of attrition between the world's great economies. Now, one hundred years after the first guns of August rang out on the Western front, historian William Philpott reexamines the causes and lingering effects of the first truly modern war. Drawing on the experience of front line soldiers, munitions workers, politicians, and diplomats, War of Attrition explains for the first time why and how this new type of conflict was fought as it was fought; and how the attitudes and actions of political and military leaders, and the willing responses of their peoples, stamped the twentieth century with unprecedented carnage on--and behind--the battlefield. War of Attrition also establishes link between the bloody ground war in Europe and political situation in the wider world, particularly the United States. America did not enter the war until 1917, but, as Philpott demonstrates, the war came to America as early as 1914. By 1916, long before the Woodrow Wilson's impassioned speech to Congress advocating for war, the United States was firmly aligned with the Allies, lending dollars and selling guns and opposing German attempts to spread submarine warfare. War of Attrition skillfully argues that the emergence of the United States on the world stage is directly related to her support for the conflagration that consumed so many European lives and livelihoods. In short, the war that ruined Europe enabled the rise of America.
Contents: Introduction: 'the war is everything' -- Ready and willing -- Into battle -- Stalemate -- A people's war -- Mobilizing manpower -- Waging war -- War machines -- Controlling the seas -- Attack -- Counterattack -- Allied hopes -- The will to victory -- Germany's last cards -- Victory on all fronts -- Epilogue: 'the Great War for civilization'?
Subjects:
World War, 1914-1918.
World War, 1914-1918 -- United States -- Influence.