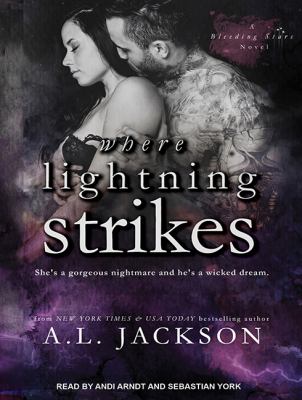 Jackson, A. L.
Format: Eaudiobook
Edition: Unabridged.
Description: 1 online resource (1 audio file (12hr., 38 min.)) : digital.
Do you know what it feels like right before lightning strikes? How you can feel the current running through your veins? The trembles of warning that ripple through the air? It was a thrill Tamar King chased all her life, until it became the very thing she had to escape. For the last four years, Tamar has hidden herself in an isolated world she created. She was safe. No one could touch her-until Lyrik West, the lead guitarist for Sunder, walked through her door. Lyrik's life has been devoted to his band, and that success has cost him. Bitter, hard, and filled with regret, he refuses to lose himself again, but from the moment he sees her, he wants one night with Tamar King. The gorgeous bartender is more than he bargained for. Their attraction is consuming. Their desire overpowering. With one touch, they ignite. But is it worth the cost of getting burned? Contains mature themes.
Other Authors:
Arndt, Andi.
York, Sebastian.
hoopla digital.