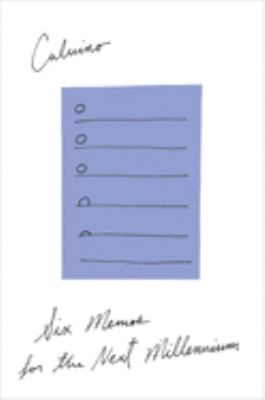 Calvino, Italo, author.
Format: Book
Edition: First Mariner Books edition.
Description: ix, 155 pages ; 21 cm
"At the time of his death, Italo Calvino was at work on six lectures setting forth the qualities in writing he most valued, and which he believed would define literature in the century to come. Here, in Six Memos for the Next Millennium, are the five lectures he completed, forming not only a stirring defense of literature, but also an indispensable guide to the writings of Calvino himself. He devotes one "memo" each to the concepts of lightness, quickness, exactitude, visibility, and multiplicity, drawing examples from his vast knowledge of myth, folklore, and works both ancient and modern. Readers will be astonished by the prescience of these lectures, which have only gained in relevance as Calvino's "next millennium" has dawned"-- Provided by publisher.
Other Authors:
Brock, Geoffrey, 1964- translator.
Contents: Lightness -- Quickness -- Exactitude -- Visibility -- Multiplicity -- Translator's Note.
Subjects:
Literature -- Philosophy.
Literary style.
Literature -- History and criticism.

"First published in Italy as Lezioni americane, by Garzanti Libri, Milan, 1988. First published in the United States (in a translation by Patrick Creagh) by Harvard University Press in 1988 and subsequently by Vintage Books, a division of Penguin Random House, in 1993." -- Title page verso.
Translated from the Italian.