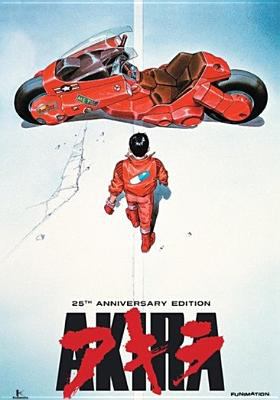 Format: DVD
Edition: 25th anniversary edition.
Description: 2 videodiscs (124 min.) : sd., col. ; 4 3/4 in.
Clandestine army activities threaten the war-torn city of Neo-Tokyo when a mysterious being with powerful psychic abilities escapes his prison and inadvertently draws a violent motorcycle gang into a heinous web of experimentation. As a result, a biker with a twisted mind embarks on a path of war, seeking revenge against a society that once called him weak.
Target Audience: Rating: R; for graphic violence and brief nudity.
ISBN: 1421027984