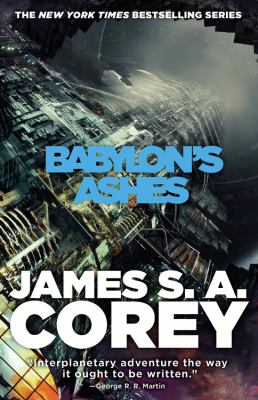 Corey, James S. A.
Format: Audiobook on CD
Edition: Unabridged.
Description: 18 audio discs (20 hr.) : digital ; 4 3/4 in.
The final war has started. The protomolecule, fairly quiescent since the opening of the gates, has identified its enemy and is arming itself for battle. Humanity is at most a tool in its post-human arsenal. When people, ships, and even places begin to disappear, Holden and the crew of the Rocinante have to face the fact that the thing they've been hauling through the depths of space only appears to be Detective Miller. The time when the protomolecule's agenda and humanity's overlapped has passed.
Series: Corey, James S. A. Expanse. Spoken word ; bk. 6.
Other Authors:
Mays, Jefferson.
Subjects:
Holden, Jim (Fictitious character) -- Fiction.
Imaginary wars and battles -- Fiction.
Life on other planets -- Fiction.
Human-alien encounters -- Fiction.
Space warfare -- Fiction.
FICTION / Science Fiction / Space Opera.
FICTION / Science Fiction / General.
FICTION / Science Fiction / Adventure.