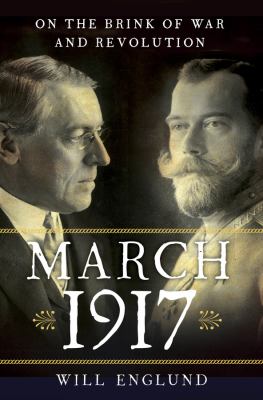 On the Brink of War and Revolution

Englund, Will, author.
Format: Book
Edition: First edition.
Description: x, 387 pages : illustrations ; 25 cm
"A riveting history of the month that transformed the world's greatest nations as Russia faced revolution and America entered World War I. "We are provincials no longer," said Woodrow Wilson on March 5, 1917, at his second inaugural. He spoke on the eve of America's entrance into World War I, as Russia teetered between autocracy and democracy. Just ten days after Wilson's declaration, Tsar Nicholas II abdicated the throne, ending a three-centuries-long dynasty and ushering in the false dawn of a democratic Russia. Wilson asked Congress to declare war against Germany a few short weeks later, asserting the United States's new role as a global power and its commitment to spreading American ideals abroad. Will Englund draws on a wealth of contemporary diaries, memoirs, and newspaper accounts to furnish texture and personal detail to the story of that month. March 1917 celebrates the dreams of warriors, pacifists, revolutionaries, and reactionaries, even as it demonstrates how their successes and failures constitute the origin story of the complex world we inhabit a century later."--Provided by publisher.
Contents: Go! Go! Go! -- A crime against civilization -- Rich earth, rotting leaves -- You fellows are in for it -- We have had to push and push and push -- People think it will be very bloody -- A twilight zone -- No, sir, boss -- A pleasant air of verisimilitude -- We are sitting on a volcano -- Cossacks riding up and down -- Happier days for all humanity -- Nothing to lose but their miserable lives -- The great liberal leader of the world -- It might be all right for you to have your little pocket gun -- Like a river at flood -- To scold an earthquake -- Reeked with patriotism -- A mending of their troubles -- The lid is kept screwed down -- When the man-world is mad for war -- History will count you right.
Subjects:
World War, 1914-1918.
Nineteen seventeen, A.D.
World War, 1914-1918 -- United States.
Soviet Union -- History -- Revolution, 1917-1921.
Europe -- History -- 1871-1918.

Hold
Book
3 of 3 available
Save to List
Includes bibliographical references (pages 361-364) and index.