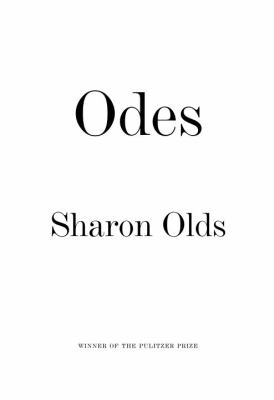 Olds, Sharon, author.
Format: Book
Edition: First edition.
Description: xii, 108 pages ; 25 cm
"Following the Pulitzer prize-winning collection Stag's Leap, Sharon Olds gives us a stunning book of odes. Opening with the powerful and tender "Ode to the Hymen," Olds addresses and embodies, in this age-old poetic form, many aspects of love and gender and sexual politics in a collection that is centered on the body and its structures and pleasures. The poems extend parts of her narrative as a daughter, mother, wife, lover, friend, and poet of conscience that will be familiar from earlier collections, each episode and memory burnished by the wisdom and grace and humor of looking back"--Jacket.
Contents: Ode to the hymen -- Ode to the clitoris -- Ode to the penis -- Ode of Broken Loyalty -- Wind ode -- Ode to my whiteness -- Amaryllis ode -- Ode to my sister -- Ode to the condom -- Ode to the tampon -- Hip replacement ode -- Ode with a silence in it -- Ode to the last thirty-eight trees in New York City visible from this window -- Ode to my living friends (January 2010) -- Ode of withered clevage -- Ode to menstrual blood -- Celibate's ode to balls -- Ode to thought -- Secondary boycott ode -- Legs ode -- Unmatching legs ode -- Matching ode -- Ode of girls' things -- Blow job ode -- Ode to the female reproductive system.
Subjects:
American poetry -- 21st century.