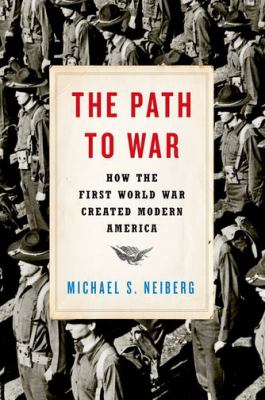 Neiberg, Michael S, author.
Format: Book
Description: v, 313 pages, 16 unnumbered pages of plates : illustrations, map ; 25 cm
When war broke out in Europe in August of 1914, Americans viewed it as the height of madness. Yet a mere three years later, the country was clamoring to join. Micheal S. Neiberg outlines America's lengthy debate and soul-searching about national identity, and the reactions to the dilemmas and crises that moved the country from ambivalence to belligerence. Neiberg also shows how the effects of the pivot from peace to war still resonate, and how the war transformed the United States into a financial powerhouse and global player. -- adapted from dust jacket.
Contents: Understanding the two Germanys -- A cause most think is right -- The impossible middle -- 1916 and the wages of guilt -- No more Jerichos -- Election year politics and national defense: an insoluble dilemma -- The melting pot, the war, and American identity -- Awaiting the overt act.
Subjects:
World War, 1914-1918 -- United States.
United States -- Politics and government -- 1913-1921.