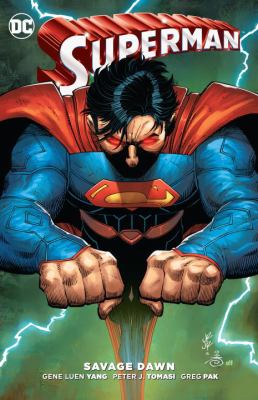 Format: Book
Description: 1 volume (unpaged) : illustrations (chiefly color) ; 26 cm
Vandal Savage can afford to be patient-he's immortal, thanks to fragments from a comet he came into contact with more than 40,000 years ago...a comet that he has since spent aeons and spilled blood trying to bring back to Earth. A comet that, should he reclaim it, will grant him untold might.

Savage's patience is about to pay off. Through his operatives, he's taken Superman's powers-and, indirectly, his secret identity-to siphon the collective strength of the Justice League and generate the ultimate tractor beam. As the beam draws Savage's long-lost comet all the way back to Earth, unsuspecting souls bearing the immortal's genetic signature are suddenly infused with maddening might, while their "father's" already-incredible power exponentially increases.

Only a handful of heroes, led by Wonder Woman and a depowered Superman, stand between Savage and his comet, and soon even they won't be enough-that is, unless Superman taps into a deadly element from his past to deny his immortal adversary a future of eternal power.