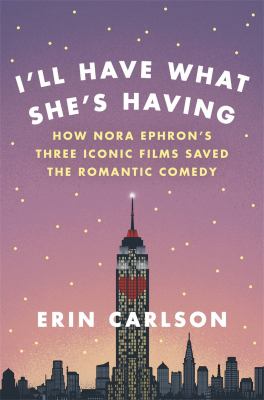 Carlson, Erin, 1981- author.
Format: Book
Edition: First edition.
Description: 341 pages : illustrations (some color) ; 24 cm
A backstage look at the making of Nora Ephron's revered trilogy-- When Harry Met Sally , You've Got Mail , and Sleepless in Seattle --which brought romantic comedies back to the fore, and an intimate portrait of the beloved writer/director who inspired a generation of Hollywood women, from Mindy Kaling to Lena Dunham.

In I'll Have What She's Having entertainment journalist Erin Carlson tells the story of the real Nora Ephron and how she reinvented the romcom through her trio of instant classics. With a cast of famous faces including Rob Reiner, Tom Hanks, Meg Ryan, and Billy Crystal, Carlson takes readers on a rollicking, revelatory trip to Ephron's New York City, where reality took a backseat to romance and Ephron--who always knew what she wanted and how she wanted it--ruled the set with an attention to detail that made her actors feel safe but sometimes exasperated crew members.

Along the way, Carlson examines how Ephron explored in the cinema answers to the questions that plagued her own romantic life and how she regained faith in love after one broken engagement and two failed marriages. Carlson also explores countless other questions Ephron's fans have wondered about: What sparked Reiner to snap out of his bachelor blues during the making of When Harry Met Sally ? Why was Ryan, a gifted comedian trapped in the body of a fairytale princess, not the first choice for the role? After she and Hanks each separatel balked at playing Mail' s Kathleen Kelly and Sleepless ' Sam Baldwin, what changed their minds? And perhaps most importantly: What was Dave Chappelle doing . . . in a turtleneck ? An intimate portrait of a one of America's most iconic filmmakers and a look behind the scenes of her crowning achievements, I'll Have What She's Having is a vivid account of the days and nights when Ephron, along with assorted cynical collaborators, learned to show her heart on the screen.
Contents: Introduction -- It was a sign -- Transitional people -- The orgasm and the aftershock -- This is her life -- Sleepless nights -- Nearest thing to heaven -- Sleepless, stressed and addicted to Starbucks -- Make Nora happy -- Stardust -- "A bouquets of newly sharpened pencils" (also known as IM-ing with the enemy) -- Pride and prejudice and perfect hair -- A heart in New York -- Afterword.
Subjects:
Ephron, Nora -- Crititicism and interpretation.
Romantic comedy films -- United States -- History and criticism.
Comedy films -- Authorship.

Hold
Book
2 of 2 available
Save to List
Includes bibliographical references (pages 301-326) and index. 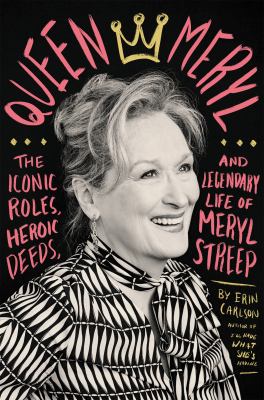