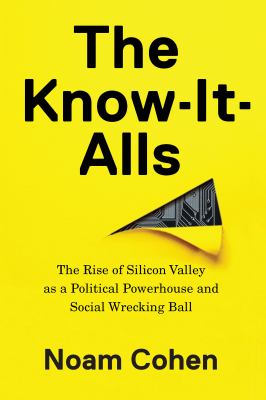 An "important" book on the "pervasive influence of Silicon Valley on our economy, culture and politics."
--New York Times

In The Know-It-Alls former New York Times technology columnist Noam Cohen chronicles the rise of Silicon Valley as a political and intellectual force in American life. Beginning nearly a century ago and showcasing the role of Stanford University as the incubator of this new class of super geeks, Cohen shows how smart guys like Jeff Bezos, Peter Thiel, Sergey Brin, Larry Page, and Mark Zuckerberg fell in love with a radically individualistic ideal and then mainstreamed it. With these very rich men leading the way, unions, libraries, public schools, common courtesy, and even government itself have been pushed aside to make way for supposedly efficient market-based encounters via the Internet.

Donald Trump's election victory was an inadvertent triumph of the "disruption" that Silicon Valley has been pushing: Facebook and Twitter, eager to entertain their users, turned a blind eye to the fake news and the hateful ideas proliferating there. The Rust Belt states that shifted to Trump are the ones being left behind by a "meritocratic" Silicon Valley ideology that promotes an economy where, in the words of LinkedIn founder Reid Hoffman, each of us is our own start-up. A society that belittles civility, empathy, and collaboration can easily be led astray. The Know-It-Alls explains how these self-proclaimed geniuses failed this most important test of democracy.
Subjects:
Computer industry -- United States -- Biography.
Information technology -- Social aspects.
Santa Clara Valley (Santa Clara County, Calif.) -- Biography.

Hold
Book
0 of 1 available
Save to List
Includes bibliographical references (pages 215-246) and index.