Join us for an online book group discussion of this month’s title, One Corpse Too Many, by Ellis Peters.

Read at your own pace and then join us at 7 p.m. on Thursday, November 19, for a lively digital discussion. A link will be sent to the e-mail address associated with your library card one day prior to the event.

One Corpse Too Many is available for immediate download for free in e-book and audiobook format via Hoopla and Libby/OverDrive. 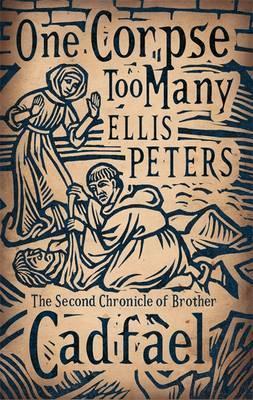 "A second, even smoother medieval adventure for Brother Cadfael (A Morbid Taste for Bones)--once a Crusader and man of the world, now an accomplished herbalist at the monastery in 12th-century Shrewsbury, a town racked by civil war.

King Stephen has conquered, his enemies have all been massacred, but--while preparing these nameless bodies for Christian burial--Cadfael finds one to be the victim of a more personal sort of murder. So he tries to identify both victim and murderer...while aiding two heroic young people on the lam.

And his ambivalent cohort in detection is valiant Hugh Beringar, whose hand-to-hand combat with the murderer wraps things up with a zing.

Peters (who writes full-blown historicals as Edith Pargeter) makes the most of the medieval atmosphere, but she never lets the meticulously researched place-and-time interfere with the canny puzzle, the flesh-and-blood characterization, or the sharp tension. A must for fans of mysteries in period settings--and good enough to win over a few who've previously shied away from that delicate sub-genre.

And, Readers, if you're looking for some "extra credit," after you're finished with the book, be sure to watch the "Brother Cadfael" television series, starring Derek Jacobi. The episode of "One Corpse Too Many" is available through the Prime Video streaming service.

Other episodes in the series are available through the Richland Library curbside hold service.