In his long and distinguished career, scientist and author Edward O. Wilson, who died on 26 December, wrote as much for a popular audience as he did for his academic peers.  In addition to several books on ants (on which he was a world authority), he published widely on evolutionary biology and conservation.  One of his collaborations with fellow ant expert Bert Hölldobler, The Ants, won the 1991 Pulitzer Prize for nonfiction.
Wilson’s career was not without controversy.  In the 1970s he helped to establish the field of sociobiology, which holds that animal social behavior (including that of humans) has an evolutionary basis, an idea that some feared could promote a deterministic view of human culture.
More recently, Wilson has written about the need for the preservation of global biodiversity in books such as Half-Earth: Our Planet’s Fight for Life.  He also published a well-received autobiography, Naturalist, about his Alabama boyhood, education, and rise to scientific prominence.  (He even published a novel, Anthill, about an Alabamian youth with a naturalist bent similar to his own.)

Check out the following titles by Wilson from our collection (the list includes two of his collaborations with Hölldobler).  Also recommended is a new biography of Wilson by Pulitzer Prize–winning author Richard Rhodes, Scientist: E. O. Wilson, a Life in Nature. 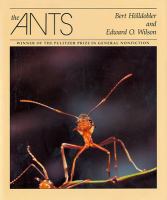 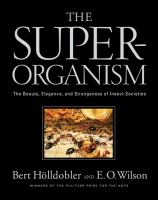 The Beauty, Elegance, and Strangeness of Insect Societies
Hölldobler, Bert, 1936-
The Pulitzer Prize-winning authors of Ants present a lavishly detailed account of the extraordinary lives of social insects that draws on more than two decades of research and offers insight into how bees, termites, and other insect societies thrive in systems of altruistic cooperation, complex communication, and labor division.
Find
Book

A Novel
Wilson, Edward O.
Inspirational and magical, this is the story of a boy who grows up determined to save the world from its most savage ecological predator: man himself.
Find
Book

Biophilia, The Diversity of Life, Naturalist

Wilson, Edward O.
"Library of America presents three environmental classics from two-time Pulitzer Prize-winner E. O. Wilson, a masterful writer-scientist whose graceful prose is equal to his groundbreaking discoveries. These books illuminate the evolution and complex beauty of our imperiled ecosystems and the flora, fauna, and civilization they sustain, even as they reveal the personal evolution of one of the greatest scientific minds of our age. Here are the lyrical, thought-provoking essays of Biophilia, a field biologist's reflections on the manifold meanings of wilderness. Here too is his magisterial, dazzlingly informative Diversity of Life: a sweeping tour of global biodiversity and a prophetic call to preserve the planet, filled on every page with little-known creatures, unique habitats, and fascinating ecological detail. Also included is Wilson's moving autobiography, Naturalist. Following him from his outdoor boyhood in Alabama and the Florida panhandle to the rainforests of Surinam and New Guinea--from his first discoveries as a young ant specialist to his emergence as a champion of conservation and rewilding--it rounds out a collection that will inspire wonder, curiosity, and love for a natural world.
Hold
Book

An Appeal to Save Life on Earth
Wilson, Edward O.
Find
Book

Letters to a Young Scientist 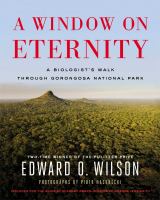 A Window on Eternity

A Biologist's Walk Through Gorongosa National Park
Wilson, Edward O.
"E.O. Wilson, one of the most celebrated scientists in the United States, shows why biodiversity is vital to the future of Earth and to our own species through the story of an African national park that may be the most diverse place on earth, in a gorgeously illustrated book"-- Provided by publisher.
Find
Book

Our Planet's Fight for Life
Wilson, Edward O., author.
"In order to stave off the mass extinction of species, including our own, we must move swiftly to preserve the biodiversity of our planet, says Edward O. Wilson in his most impassioned book to date. Half-Earth argues that the situation facing us is too large to be solved piecemeal and proposes a solution commensurate with the magnitude of the problem: dedicate fully half the surface of the Earth to nature."--Amazon.
Find
Book

The Meaning of Human Existence

Wilson, Edward O., author.
In The Meaning of Human Existence, his most philosophical work to date, Pulitzer Prize-winning biologist Edward O. Wilson examines what makes human beings supremely different from all other species and posits that we, as a species, now know enough about the universe and ourselves that we can begin to approach questions about our place in the cosmos and the meaning of intelligent life in a systematic, indeed, in a testable way.
Find
Book

The Origins of Creativity

Tales from the Ant World

Wilson, Edward O., author.
"Summary Edward O. Wilson recalls his lifetime with ants-from his first boyhood encounters in the woods of Alabama to perilous journeys into the Brazilian rainforest." Ants are the most warlike of all animals, with colony pitted against colony. ... Their clashes dwarf Waterloo and Gettysburg," writes Edward O. Wilson in his most finely observed work in decades. In a myrmecological tour to such far-flung destinations as Mozambique and New Guinea, the Gulf of Mexico's Dauphin Island and even his parents' overgrown yard back in Alabama, Wilson thrillingly evokes his nine-decade-long scientific obsession with more than 15,000 ant species. Wryly observing that "males are little more than flying sperm missiles" or that ants send their "little old ladies into battle," Wilson eloquently relays his brushes with fire, army, and leafcutter ants, as well as more exotic species: the Matabele, Africa's fiercest warrior ants; Costa Rica's Basiceros, the slowest ants in the world; and New Caledonia's Myrmecia apicalis, the most endangered of them all. A personal account by one of our greatest scientists, Tales from the Ant World is an indispensable volume for any lover of the natural world"-- Provided by publisher.
Find
Book
Author