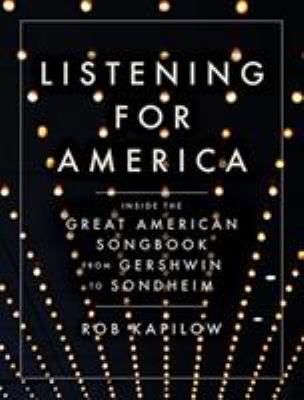 Inside the Great American Songbook from Gershwin to Sondheim

Kapilow, Robert, author.
Format: Book
Edition: First edition.
Description: xvii, 460 pages : illustrations ; 25 cm
""Not since the late Leonard Bernstein has classical music had a combination salesman-teacher as irresistible as Kapilow." -Kansas City Star Few people in recent memory have dedicated themselves as devotedly to the story of twentieth- century American music as Rob Kapilow, the composer, conductor, and host of the hit NPR music radio program, What Makes It Great? Now, in Listening for America, he turns his keen ear to the Great American Songbook, bringing many of our favorite classics to life through the songs and stories of eight of the twentieth century's most treasured American composers-Kern, Porter, Gershwin, Arlen, Berlin, Rodgers, Bernstein, and Sondheim. Hardly confining himself to celebrating what makes these catchy melodies so unforgettable, Kapilow delves deeply into how issues of race, immigration, sexuality, and appropriation intertwine in masterpieces like Show Boat and West Side Story. A book not just about musical theater but about America itself, Listening for America is equally for the devotee, the singer, the music student, or for anyone intrigued by how popular music has shaped the larger culture, and promises to be the ideal gift book for years to come"-- Provided by publisher.
Contents: Prologue : Nothing Comes from Nothing -- Inventing America / Jerome Kern's "Can't Help Lovin' Dat Man" -- The New Sexual Morality / Cole Porter's "Let's Do It" -- Airbrushing the Depression / George Gershwin's "I Got Rhythm" -- Segregation and Opportunity in Harlem / Harold Arlen's "Stormy Weather" -- Appropriation or Inspiration? / George Gershwin's "Summertime" -- Immigration and the American Voice / Irving Berlin's "Cheek to Cheek" -- How the Other Half Lived / Cole Porter's "Begin the Beguine" -- Love in New York / Richard Rodgers's "I Wish I Were in Love Again" -- The Impact of Recorded Sound / Jerome Kern's "All the Things You Are" -- America Goes to the Movies / Harold Arlen's "Over the Rainbow" -- World War II and the Integrated Musical / Richard Rodgers's "If I Loved You" -- America Gets a Classical Voice / Leonard Bernstein's "I Can Cook Too" -- Will the Real Annie Oakley Please Stand Up? / Irving Berlin's "I Got the Sun in the Morning" -- Fantasy in New York / Leonard Bernstein's "Tonight" -- Rock and Roll, Broadway, and the Me Decade / Stephen Sondheim's "Send in the Clowns" -- New Directions On and Off Broadway / Stephen Sondheim's "Finishing the Hat" -- Epilogue : The Broadway Musical Goes Global.
Subjects:
Popular music -- United States -- History and criticism.
Songs -- United States -- 20th century -- History and criticism.
Songs -- United States -- 20th century -- Analysis, appreciation.
Musicals -- United States -- 20th century -- History and criticism.