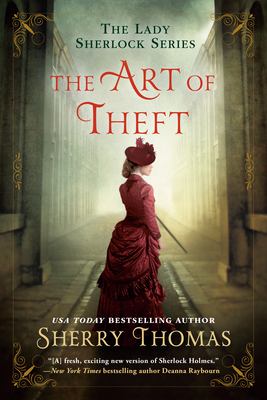 Thomas, Sherry (Sherry M.), author.
Format: Book
Edition: First edition.
Description: 294 pages ; 21 cm.
"As "Sherlock Holmes, consulting detective," Charlotte Holmes has solved murders and found missing individuals. But she has never stolen a priceless artwork--or rather, made away with the secrets hidden behind a much-coveted canvas. But Mrs. Watson is desperate to help her old friend recover those secrets and Charlotte finds herself involved in a fever-paced scheme to infiltrate a glamorous Yuletide ball where the painting is one handshake away from being sold and the secrets a bare breath from exposure. Her dear friend Lord Ingram, her sister Livia, Livia's admirer Stephen Marbleton--everyone pitches in to help and everyone has a grand time. But nothing about this adventure is what it seems and disaster is biding time on the grounds of a glittering French chateau, waiting only for Charlotte to make a single mistake."-- Provided by publisher.
Series: Thomas, Sherry (Sherry M.). Lady Sherlock series ; bk. 4.
Subjects:
Women private investigators -- Fiction.
Extortion -- Fiction.
France -- Social life and customs -- 19th century -- Fiction.
Great Britain -- History -- Fiction.