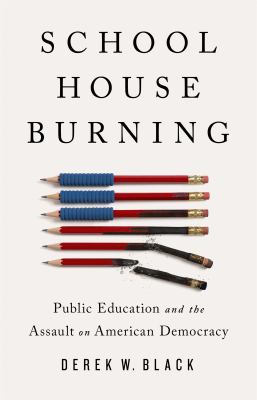 Public Education and the Assault on American Democracy

Black, Derek W., author.
Format: Book
Edition: First edition.
Description: vii, 309 pages : illustrations ; 25 cm
"We are in the midst of a full-scale attack on our nation's commitment to public education. From funding, to vouchers, to charter schools, public education policy has become a political football, rather than a means of fulfilling the most basic obligationof government to its citizens. As Derek W. Black vividly illustrates, this assault threatens not just public education, but democracy itself. Black offers both an illuminating history of our nation's establishment of a constitutional right to education,and a trenchant analysis of how such a right is being undermined today. He looks at education history with a wide view, describing both periods when our democracy has been strengthened-when the commitment to public education has been strongest-and weakened, when such a commitment has been lacking. And today, such a commitment is sorely lacking. Schoolhouse Burning shows what is at stake: not just the right to public education as guaranteed by the constitution, but an erosion of democratic norms"-- Provided by publisher.
Subjects:
Public schools -- United States.
Democracy and education -- United States.

Hold
Book
0 of 1 available
Save to List
Includes bibliographical references (pages 263-293) and index.