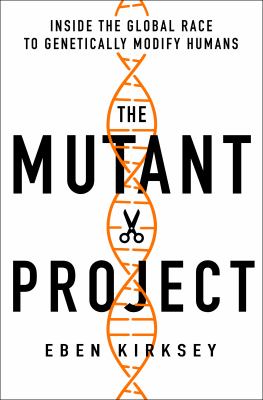 Inside the Global Race to Genetically Modify Humans

Kirksey, Eben, 1976- author.
Format: Book
Edition: First edition.
Description: 292 pages ; 25 cm
"An anthropologist visits the frontiers of genetics, medicine, and technology to ask: Whose values are guiding gene editing experiments? And what does this new era of scientific inquiry mean for the future of the human species? "That rare kind of scholarship that is also a page-turner." -Britt Wray, author of Rise of the Necrofauna At a conference in Hong Kong in November 2018, Dr. He Jiankui announced that he had created the first genetically modified babies-twin girls named Lulu and Nana-sending shockwaves around the world. A year later, a Chinese court sentenced Dr. He to three years in prison for "illegal medical practice." As scientists elsewhere start to catch up with China's vast genetic research program, gene editing is fueling an innovation economy that threatens to widen racial and economic inequality. Fundamental questions about science, health, and social justice are at stake: Who gets access to gene editing technologies? As countries loosen regulations around the globe, from the U.S. to Indonesia, can we shape research agendas to promote an ethical and fair society? Eben Kirksey takes us on a groundbreaking journey to meet the key scientists, lobbyists, and entrepreneurs who are bringing cutting-edge genetic engineering tools like CRISPR to your local clinic. He also ventures beyond the scientific echo chamber, talking to disabled scholars, doctors, hackers, chronically-ill patients, and activists who have alternative visions of a genetically modified future for humanity. The Mutant Project empowers us to ask the right questions, uncover the truth, and navigate this brave new world"-- Provided by publisher.
Contents: Prologue: The World on Notice -- 1: I'm Quite Glad That I Wasn't First -- 2: The China dream -- 3: The Best Humans Haven't Been Produced Yet -- 4: Winner Takes All -- 5: Look at Those Muscles, Look at That Butt -- 6: A Moral Choice -- 7: Will I Have to Mortgage My House? -- 8: The Cancer Moonshot -- 9: Free Health Care for All -- 10: Silence = Death -- 11: Immortality Has to Be the Goal --12: I Don't Want to Walk, I Want to Fly -- 13: High-Quality Children -- 14: #Transracial -- 15: American Medicine and Only for You -- 16: He Was Busy, Busy, Always Doing Research -- 17: A Hammer, Looking for a Nail -- 18: Beautiful Lies -- 19: Two Healthy Baby Girls? -- 20: Mixed Wisdom -- 21: They Are Moving Forward -- 22: Chinese Scientists Are Creating CRISPR Babies -- 23: Bubbles Vanishing into Air -- 24: The Horse has Already Bolted -- Epilogue: We Have Never Been Human.
Subjects:
Genetic engineering.
Human genetics.
Human genome.
Mutation (Biology)
Human body -- Forecasting.

Hold
Book
1 of 1 available
Save to List
Includes bibliographical references (pages 265-278) and index.