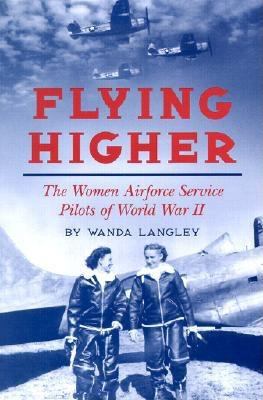 Langley, Wanda.
Format: Book
Description: x, 132 pages : illustrations ; 24 cm
The year was 1942 and a global war was raging. In the US all military pilots were needed for combat duty, which left critical piloting jobs vacant across the land. Who would deliver the newly manufactured planes to their domestic bases? Who would train new flight crews and tow targets for anti-aircraft practice, test new planes and retest old ones? The answer was: women. These elite pilots were the WASPs. Civilians all, they earned their wings so that they could undertake hazardous, and sometimes deadly, flight assignments. At the same time, these young women loved their work. They leapt at the chance to fly an array of fighter planes, and even the big B-29 bombers that scared off many men. They were an intrepid group whose service was as essential at the time as it was later overlooked. Adventurous in play as well as work, the WASPs got into, and out of, some hair-raising episodes. Wanda Langley has conducted extensive interviews with former WASPs, and has the insider's details of their escapades, as well as their training and service.Much of the story is seen in the life of Marie Michell, a nineteen-year-old WASP and fine pilot whose death in a crash underscores the dangers these women faced on a daily basis while doing what they did best to serve their country in war.
Subjects:
Women Airforce Service Pilots (U.S.)
Women air pilots -- United States -- History -- 20th century -- Juvenile literature.
World War, 1939-1945 -- Aerial operations, American -- Juvenile fiction.
World War, 1939-1945 -- Women -- United States -- Juvenile literature.

Hold
Book
2 of 2 available
Save to List
Includes bibliographical references (pages 125-127) and index.