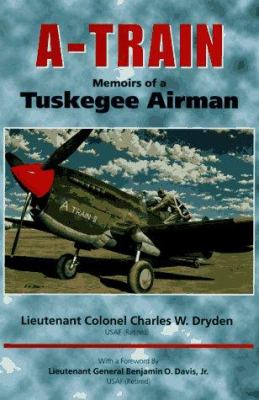 Memoirs of a Tuskegee Airman

A-Train is the story of one of the black Americans who, during World War II, graduated from Tuskegee (AL) Flying School and served as a pilot in the Army Air Corps' 99th Pursuit Squadron. Charles W. Dryden presents a fast-paced, balanced, and personal account of what it was like to prepare for a career traditionally closed to African Americans, how he coped with the frustrations and dangers of combat, and how he, along with many fellow black pilots, navigators, bombardiers, and crewmen, emerged with a magnificent war record.

Under the command of Colonel Benjamin O. Davis Jr., the Tuskegee airmen fought over North Africa, Sicily, and Europe, escorting American bomber crews who respected their "no-losses" record. Some were shot down, many of them were killed or captured by the enemy, and several won medals of valor and honor. But the airmen still faced great barriers of racial prejudice in the armed forces and at home. As a member of that elite group of young pilots who fought for their country overseas while being denied civil liberties at home, Dryden presents an eloquent story that will touch each and every reader.

Hold
Book
1 of 1 available
Save to List
Includes bibliographical references (page 409) and index.