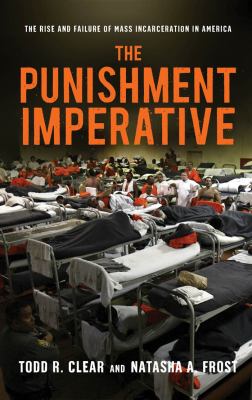 The Rise and Failure of Mass Incarceration in America

Clear, Todd R., author.
Format: Book
Description: xi, 258 pages : illustrations ; 24 cm
"Over the last 35 years, the United States penal system has grown at a rate unprecedented in U.S. history, five times larger than in the past and grossly out of scale with the rest of the world. This growth was part of a sustained and intentional effort to "get tough" on crime, and characterizes a time when no policy options were acceptable save for those that increased penalties. In this book, the authors, both eminent criminologists argue that America's move to mass incarceration from the 1960s to the early 2000s was more than just a response to crime or a collection of policies adopted in isolation; it was a grand social experiment. Tracing a wide array of trends related to the criminal justice system, the book charts the rise of penal severity in America and speculates that a variety of forces, fiscal, political, and evidentiary, have finally come together to bring this great social experiment to an end. The book cautions that the legacy of the grand experiment of the past forty years wiil be difficult to escape. However the authors suggest that the U.S. now stands at the threshold of a new era in the criminal justice system, and they offer several practical and pragmatic policy solutions to changing the approach to punishment. -- Publisher website.
Other Authors:
Frost, Natasha A., 1974- author.
Contents: The beginning of the end of the punishment imperative -- The contours of mass incarceration -- The punishment imperative as a grand social experiment -- The policies of the punishment imperative -- Two views on the objectives of the punishment imperative -- Assessing the punishment imperative -- Dismantling the punishment imperative.
Subjects:
Imprisonment -- United States.
Corrections -- United States.
Criminal justice, Administration of -- United States.

Hold
Book
1 of 1 available
Save to List
Includes bibliographical references (pages 189-251) and index.