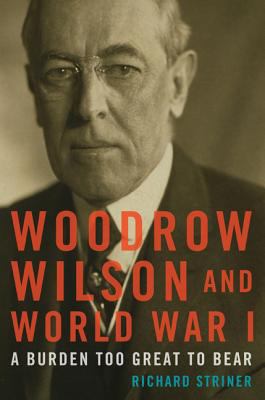 A Burden Too Great to Bear

Striner, Richard, 1950-
Format: Book
Description: x, 290 pages : illustrations ; 24 cm
Woodrow Wilson is often considered one of the greatest presidents in American history because, in the first two years of his presidency, he succeeded on many fronts. However, acclaimed author and historian Richard Striner now makes the case that a presidency that is too often idealized was full of missteps and failures that profoundly affected America's politics and people long after it ended. While other negative assessments of Wilson's leadership have been one-sided, Striner's critique-though undoubtedly scathing-is judicious, nuanced, and fair. With detailed description and accessible prose, Striner sheds light on how-as soon as America entered World War I-flaws of Wilson's were exposed as the pressure on his administration mounted. This book is a story of presidential failure, a chronicle of Woodrow Wilson's miscalculations in war, and a harrowing account of the process through which an intelligent American leader fell to pieces under a burden he could not bear.
Contents: Foreshadowings. 1914 -- 1915 -- 1916 -- Nemesis. 1917 -- 1918 -- 1919 -- 1920-1924.
Subjects:
Wilson, Woodrow, 1856-1924.
World War, 1914-1918 -- United States.
World War, 1914-1918 -- Diplomatic history.
Political leadership -- United States -- History -- 20th century.
United States -- Foreign relations -- 1913-1921.

Woodrow Wilson and World War I : a burden too great to bear
Striner, Richard, 1950-