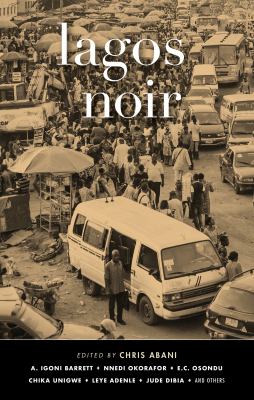 "In the introduction to this excellent anthology, Abani welcomes readers to Lagos, Nigeria, a city of more than 21 million and an amazing amalgam of wealth, poverty, corruption, humor, bravery, and tragedy. Abani and a dozen other contributors tell stories that are both unique to Lagos and universal in their humanity...This entry stands as one of the strongest recent additions to Akashic's popular noir series."
-- Publishers Weekly , Starred review, pick of the week for June 4

"Lagos, the largest city in Nigeria, with a population of 21 million, has, like many coastal cities, a 'very checkered and noir past,' writes novelist Chris Abani in his introduction to this anthology."
-- BBC Culture

"The beauty of this book, which contains 13 stories from Nigerian writers, is that it serves as a travelogue, too."
-- Bloomberg , included in "The Darkest Summer Reading List for Those Bright, Beachy Days"

"Through his prolific and varied writings, Nigerian-born Chris Abani has shared stories that open one's knowledge of the region beyond its colonial past. The recent release of Lagos Noir highlights West African authors as meticulously edited by Abani, one of the country's best-known authors."
-- Philadelphia Tribune

"This year among a number of standout anthologies, Lagos Noir was a cut above, in part because the city itself is so alive, so sure of itself and its place in the world, a proper megacity for the twenty-first century, and in part because the city is host to such a vibrant literary scene, which editor Chris Abani tapped to great effect. With writers like Igoni Barrett, Leye Adenle, and E.C. Osondu contributing, Lagos Noir offers wildly different perspectives on both the city itself and the state of noir fiction. This book is almost like a world in itself, one that you'll want to dive back into and get lost in again and again."
-- CrimeReads , One of the 10 Best Crime Anthologies of 2018

Akashic Books continues its award-winning series of original noir anthologies, launched in 2004 with Brooklyn Noir. Each book comprises all new stories, each one set in a distinct neighborhood or location within the respective city. Now, West Africa enters the Noir Series arena, meticulously edited by one of Nigeria's best-known authors.

From the introduction by Chris Abani:

Lagos has, like many coastal cities, a very checkered and noir past. It is the largest city in Nigeria and its former capital. It is also the largest megacity on the African continent, with a population approximating twenty-one million, and by itself is the fourth-largest economy in Africa...It is rumored that there are more canals in Lagos than in Venice. Except in Lagos they are often unintentional. Gutters that have become waterways and lagoons fenced in by stilt homes or full of logs for a timber industry most of us don't know exists. All of it skated by canoes as slick as any dragonfly. There are currently no moonlight or other gondola rides available...

The thirteen stories that comprise this volume stretch the boundaries of "noir" fiction, but each one of them fully captures the essence of noir, the unsettled darkness that continues to lurk in the city's streets, alleys, and waterways...Together, these stories create an unchartered path through the center of Lagos and out to its peripheries, revealing so much more truth at the heart of this tremendous city than any guidebook, TV show, film, or book you are likely to find.

Contents: What they did that night / by Jude Dibia -- Heaven's gate / by Chika Unigwe -- Showlogo / by Nnedi Okorafor -- Just ignore and try to endure / by A. Igoni Barrett -- The swimming pool / by Sarah Ladipo Manyika -- What are you going to do? / by Adebola Rayo -- For baby, for three / by Onyinye Ihezukwu -- Eden / by Uche Okonkwo -- Joy / by Wale Lawal -- Choir boy / by 'Pemi Aguda -- The walking stick / by E.C. Osondu -- Uncle Sam / by Leye Adenle -- Killer ape / by Chris Abani.
Subjects:
Detective and mystery stories, Nigerian (English).
Short stories, Nigerian (English).
Lagos (Nigeria) -- Fiction.